This week saw the publication of a special report by the Intergovernmental Panel on Climate Change (ICPP) entitled “Global Warming of 1.5°C”, the most significant warning about the impact of climate change in 20 years. The report highlights a number of climate change impacts that could be avoided by limiting global warming to 1.5°C compared to 2°C, or more. For instance, by 2100, global sea level rise would be 10 cm lower with global warming of 1.5°C compared with 2°C. The likelihood of an Arctic Ocean free of sea ice in summer would be once per century with global warming of 1.5°C, compared with at least once per decade with 2°C. Coral reefs would decline by 70-90% with global warming of 1.5°C, whereas virtually all (> 99 percent) would be lost with 2°C. While the findings of the report are alarming, on the positive side it does say that the world is capable of limiting global warming to 1.5°C but this would require rapid, far-reaching and unprecedented changes in all aspects of society. This got me thinking about Ireland’s greenhouse gas (GHG) emission and how we are doing in terms of meeting our reduction targets.

Of course, it is easy to say that Ireland is a small country with a relatively small population, and therefore the GHG’s that we produce are too small to make a difference to global climate change. This, however, is a global issue and therefore, every country, government and individual needs to act. Earlier this year, I read a report published by the Central Statistics Office which said that in 2015 Ireland had the third highest greenhouse emissions rates per capita within the EU (after Estonia and Luxembourg), with emissions 45% higher than the EU average. In simplistic terms, Irish inhabitants are having a disproportionally higher impact on the environment in terms of GHG emissions than our European counterparts. But surely our GHG emissions must be decreasing with all the EU targets and regulations?

To be fair Ireland was making good progress on its commitments during the recession years, but frustratingly we have since fallen back to 2009 emissions levels. According to the Climate Change Advisory Council (CCAC) most recent report (2018), GHG emissions in Ireland increased by 3.7% between 2014-2015 and by a further 3.6%* between 2015-2016. Not only is Ireland’s rate of GHG emissions increasing, we are also reducing the amount of carbon we are removing from the environment (by changing land use and increasing tree cover for example),  thereby escalating the problem.  In 2016, GHG removals through carbon sinks in the land use, land-use change and forestry sector decreased slightly by 2.5%. The authors of the CCAC report warn that the country is completely off course in its efforts to achieve 2020 and 2030 national, EU and international emissions reduction targets [see BOX below]. Not only might this cost us up to €600 million per annum in EU fines, it’s embarrassing and does not give a good impression of the “green” emerald isle on the international stage.  So what exactly are we doing wrong? Where do our GHG emissions come from and why are they increasing?

*this figure does not take land use, land use change or forestry into considering

The agricultural sector is the single largest contributor to Ireland’s overall GHG emissions, accounting for 32.3% of the total, followed by the energy (20.4%) and transport (20%) sectors. The remainder is made up by the residential sector (9.8%), industry and commercial sector (10.7%), F-gases (2.1%) and waste (1.6%). Between 2015-2016, emissions from all sectors increased with the exception of the waste sector.

Agricultural and climate change? Surely that’s not a thing? I can assure you it very much is a thing, but most agricultural-related GHG emissions come in the form of methane and nitrous oxide, not carbon dioxide which we hear about more commonly in relation to global warming. Ruminants such as cattle and sheep play a key role in GHG emissions by expelling methane, a by-product of their digestive system, into the environment by belching (not by farting as is often joked about). While methane stays in the atmosphere for a shorter amount of time it has a higher global warming potential and therefore is more damaging than carbon dioxide. In addition, natural and/or synthetic fertilisers when added to soils result in the release of large quantities of nitrous oxide which also has a higher global warming potential than carbon dioxide. Smaller sources include manure management, rice cultivation, field burning of crop residues, and fuel use on farms.

In Ireland, annual agriculture GHG emissions increased by 2.7% in 2016 and emissions are projected to increase further over the next decade.  This is largely being driven by the industry taking advantage of market opportunities arising from the removal of quotas on dairy production. The number of dairy cows in Ireland increased by 25.1% between 2011-2016 (by 270,000 animals) and even non-dairy cattle numbers increased too, by 8.9 % in the same period (by 475,000 animals). While animal numbers are fundamental drivers of emissions within the sector, the type of animals being farmed and farm management practices also play a critical role. In addition, much of our agricultural land is managed to produce fodder to feed the animals, leading to emissions associated with nutrient management and the use of nitrogen fertilisers. 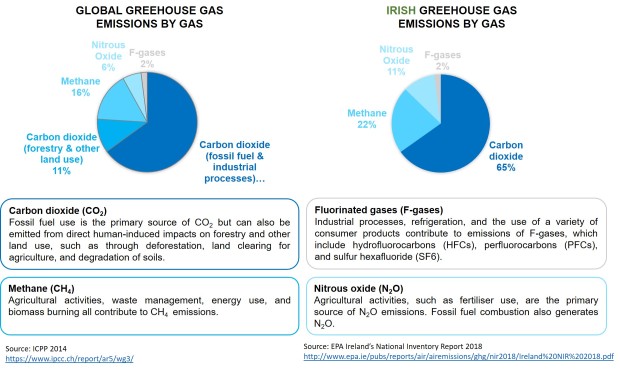 Emissions from the energy sector increased by 6.1% between 2015-2016, driven primarily by an increase in demand for electricity and more electricity generation from natural gas. On the positive side, the use of coal and peat did decrease in the same period, however renewable energy sources also decreased due to weather conditions.

In 2016, GHG emissions from the transport sector increased by 3.7% and this was the fourth successive year of increases in this sector, driven primarily by economic and employment growth.

Emissions increased by 7.1% mainly due to increased cement production.

What is Ireland doing to reduce emissions?

According to the Department of Communications, Climate Action and Environment website the Irish Government is “taking the lead in addressing this [climate change] challenge”. Based on the grim emissions figures for the last two years, it is clear that the governments actions are NOT speaking louder than their words. And while this isn’t exactly a surprise, they are politicians after all, it will be the Irish taxpayers who  ultimately bear the costs of the heavy EU fines coming down the road in the not so distant future.

Ireland’s Performance Against Existing Obligations of the State

One thought on “How does Ireland Stack up in the Fight against Global Climate Change?”